Rebuilding and Installing a "1939" Transmission

In 1932 through 1934 cars and trucks, Ford's recommended procedure for removing the transmission is to remove the engine. This doesn't quite require taking the entire car apart since you can leave the body bolted to the frame, but you would have to remove the hood and radiator. For 1935 vehicles, they give a procedure where you can jack up the rear of the car or truck, detach the mechanical brakes and shock absorbers, unbolt the torque tube from the transmission, and unbolt the rear leaf spring from the frame. Then you can slide the entire rear drive assembly, including the axle, wheels, torque tube and "wish bones" out of the way. Then you'll be able to unbolt the transmission from the engine and remove it from the inside of the car. All this is made possible by the wooden floor boards at the front of the car or truck. 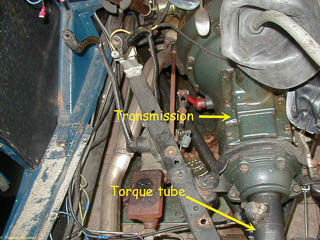 Amazingly enough, the nuts on the spring shackle bolts weren't rusted solid -- again a tribute to the previous owner who had done all the hard work in restoring this truck. 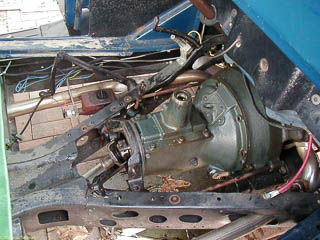 We did all that, tried to slide the transmission back, and after it moved perhaps half an inch, we were stuck. It wouldn't go further back without hitting the frame, and wouldn't come up with the input shaft still in the engine.

We were frustrated enough at that point to put everything back together and ask for advice: had we forgotten something? Did we have to raise the entire engine first? Here's the message I sent to the Yahoo Flathead group:

I guess one of the hazards of buying a car that someone else put together is that you don't necessarily know how to take it apart.

I got a "newer" transmission at a swap meet and recently finished rebuilding it. My truck is from 1935, but had already been converted to hydraulic brakes using, I guess, a 1939 pedal assembly.

A couple manuals suggested that to remove the transmission without pulling the engine, you remove the shock links (check), disconnect the brake rods (I disconnected the parking brake cable and rear hydraulic line), the speedometer cable (check), the torque tube bell housing (check) and finally the shackle bolts on the rear spring (check). Then lift the frame to clear the rear spring and pull the rear axle and torque tube as a unit (check).

Now the book says "pull the transmission back to clear the engine and remove through the floor.

Ooops! The transmission can't move back more than 3/8 of an inch! The rear transmission mount is set down in the frame rails and doesn't let it move back. Can't lift the transmission any because the main shaft is in the engine. Thought about lifting the engine up, but I'd have to remove the exhaust (which should be okay), but also might have to unbolt the front engine mounts and remove the lower radiator hoses.

So, I gave up, for now, and put everything back, thinking I'll have to pull the engine after all, but that's not something I was prepared to do today.

Anyway, when I got everything back, almost the last thing I did was lower the frame onto the rear spring. That got me thinking: I'd only pulled the axle back far enough to drop the torque tube to the ground, but didn't pull it completely clear of the truck (the rear fenders were in the way unless I jacked the frame up a little higher). If I did that and lowered the frame some, would that be likely to get me any clearance at the rear of the transmission?

If any one here has successfully removed the transmission without pulling the engine on a torque tube drive train, are there any tips?

The advice I got back was that this was the correct procedure, and that it may be necessary to jack up the engine. It was several weeks before I got a chance to try again. Just in case, tried to get the exhaust headers off. This was tricky since everything was bolted into place (the exhaust hangers up by the transmission have some plastic washers to absorb vibration, but not enough flex to pull back). And not a lot of clearance.

It's a little awkward to straddle the frame and lift the transmission out, but that seemed easier than leaning way over. Now I just had to wrestle the new transmission back in!